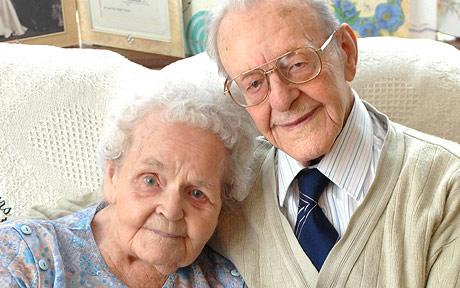 The photo above is a testament to a long and happy marriage.  Phyliss Tarrant has just turned 100 and along with her husband Ralph, 105, it makes them Britain’s oldest married couple.  If you happen to read the New York Times, you may have seen the op-ed piece called “How Marriage Survives” by Justin Wolfers.  Justin is a visiting fellow at the Brookings Institution and an assistant professor of business and public policy at the University of Pennsylvania’s Wharton School of Business.

Justin says recent media reports claiming the marriage rate is on the decline because young people can’t afford to marry are simply untrue.  Still, he says there has been a decline in the marriage rate, but the recession is not the cause.  “Right now, 81 percent of all Americans have married at least once by age forty.  That is, marriage remains a central institution in American life”.

He goes on to say that there were about 2.1 million marriages in the United States last year. That does represent a slight decline, but the divorce rate is also going down – so the good news is a greater proportion of today’s marriages will likely persist 30 years into the future.  Now that is something to smile about.